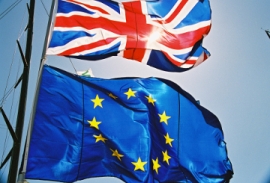 Firstly, this is NOT a political post. It is simply, (if only it was!) a time frame in the history of Europe. I have no intention of sharing my personal vote in the Referendum in 2016 or in the EU Elections of 2019. I merely write this post and share it here, because whilst it might be our present, at some point in the future it will be our history and that is important to note, especially if you have European Ancestors or you have a descendants that will have.

The structure of Europe was, in simplistic terms a way of Britain working with our nearest trading partners which is of course, geographically speaking is Europe. Importantly, we no longer had an “Empire” which we could fall back on and trade with exclusively. After the Second World War there was a great deal of devastation, Europeans displaced after six years at war, a brutal Nazi regime and the realisation of the tragic events of that regime and then the formation of what we then called the Eastern Bloc, essentially East Germany and pushed east to Russia.

Into the early 1970’s we began to feel more at ease with some of our European counterparts.  In 1973 the European Economic Community (EEC) enabled the movement of trade and people freely, with the appropriate documentations. Those who were classified “Aliens” no longer had to report to the Police and were free to live here subject to various regulations. In 1990 the Berlin Wall came down, Germany was unified and we, that is continental Europe and the UK looked forward to a new era.

The collapse of the Communist ruling across parts of Europe meant that there was a further set of developments in Europe. A way forward was to enable Countries in Europe to come together as the European Union. Some Countries did this straight away as soon as the possibility presented itself. Others, like the UK waited until Parliament made that decision, which happened without of a vote of the People.

The strategy of the European Union was actually common sense, one currency, one set of rules etc. Except that some countries did not want the one currency, the UK was one of those and there are others. The rule book was easy, well that is until a referendum vote produced a leave result and that opened the European box called Pandora and we realised, that we had allowed ourselves to be enshrined in 750 different pieces of European Legislation that would need to be written and put through Parliament.

Of course, this is a very highly simplified post about the formation of the EEC, EU and the result of the dismantling of that union with Europe, should we get to that point. There are a number of factors that I present here because at some point in the future they will bear historical and contextual relevance for those who are or will be researching European Ancestors:

….and that is just the start.

We were treading un-chartered waters here, with a member State wishing to leave the Union. It is okay to create the rule book, but without a test case no one really knows if it, whatever it is, is going to work or at the very least be fit for purpose.

Furthermore, I make the obvious statement that you don’t know what you don’t know. Essentially, Citizens do not know what questions that might ask or the implications of things. That is why with anything, whether that is casting a vote or buying a house, car etc, you generally do so with the ability of making an informed decision.

Meanwhile, the UK, the EU and the world looks on and watches, waiting for the next move by someone who may have considered something and has the ability to enable us, as members of the UK and citizens of a Country that resides within  the Continent of Europe to move forward in the best way we can.

At some point in the future we may find ourselves with a number of Europeans who are no longer allowed to be here unless there is a provision made and equally we may find ourselves with British citizens who reside in the UK suddenly finding themselves no longer allowed to reside there. In both cases there are likely to be form filling and bureaucracy  to understand and navigate.

That is a situation that has happened before and anyone who has heard me speak about Polish migrants in the UK at the end of the Second World War may recall the information I shared. If you did not hear that presentation, you can listen to it at Legacy Family Tree Webinars and stay tuned as I shall write about that in the coming week.

Whatever happens going forward it is going to be interesting and I wonder what future generations will make of it. Just as we might find historical elements such as the Ottoman Empire confusing, so shall folk in the future with this scenario.

Please note – comments are moderated, so if you choose to leave a political response it will not appear here!