This post is part of a series about genealogy in France. You can read the complete series HERE.

Corsica, an island located in the Mediterranean Sea and one of the eighteen regions of France. The island lies to the southeast of the French mainland, west of the Italian Peninsular and immediately north of the Italian island of Sardinia which is it’s nearest landmass.

The regional capital is Ajaccio and whilst the region is divided into two administrative departments, Haute-Corse and Corse-du-Sud, their respective regional and departmental territories were merged on 1 January 2018. Corsica has a greater degree of autonomy than other French regionals, and island officials are permitted to use their limited executive powers. As of January 2022, Corsica had a population of 349,465. 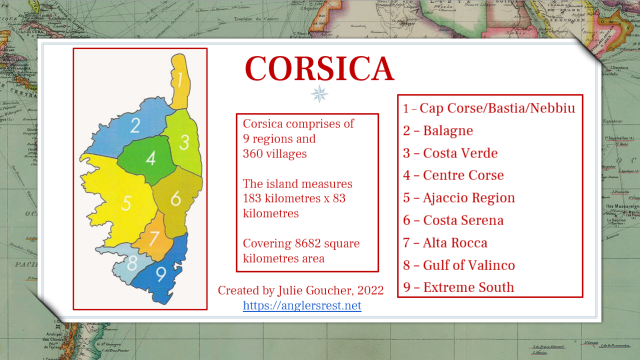 The official language is French, as it is administered by France, but the majority of the Islanders speak Corsu. Traditionally, the language only had an oral presence, but gradually, over time into the late 19th Century, it was developed into a written language. Originating from Tuscany, influenced by Latin, and is part of the Indio European Romance languages. Corsu is not a dialect of either Italian or French.

Some useful sites can be found below: