I spent a lot of time yesterday thinking about my Grandparents and in particular my maternal Grandparents; George Butcher (1908-1974) and Lilian Edith Matthews (1912-1995).

The United Kingdom declared war on Germany on 3rd September 1939. My Grandparents married at Guildford Registry Office on 4th November 1939. I don’t know if they had planned that date originally, or whether they acted because of the war and the uncertainty that laid ahead. They are both on the 1939 Register, though living separately, George with his parents and several of his siblings (and including their spouses) at Manor Farm, Guildford and Lilian who was living with her sister, brother in law and their three children.

By 1939, my Grandmother, known as Lil had lost both of her parents. She was close though to her older sister Elsie and the same could be said of her sister in laws, the sisters of my Grandfather – Dorothy (known as Doll), Rose, Ellen (known as Nell), Gladys and Marjorie (known as Marge, who had married my Grandmother’s brother). My Grandfather’s parents were also alive. Despite that, the witnesses to my Grandparents wedding were friends and I know that at least my Great Aunts Doll and Elsie were there. No photographs exist of their special day.

George Butcher in Sierra Leone circa 1942

On 12 December 1940, my Grandfather enlisted in the army. He was 32 years old and my Grandmother was almost 28). My Grandfather was posted to Sierra Leone in West Africa in 1941 where he remained until November 1943. He then served on home soil until July 1944 when he was posted to north west Europe, remaining there until 29 November 1945 when he returned to the UK. He was demobbed in March 1946. My late Mum, their only child was born in February 1947.

I spent time pondering how did my Grandparents adjust? Did they have to get to know one another again? What and where did he serve in north west Europe? Whilst I have some clues, I do need to explore the war diaries to gain better insight. 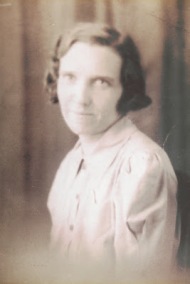 Lilian Edith Matthews on her 21st Birthday in 1933

During the war my Grandmother had worked at the laundary in Guildford where they dealt with the washing from the Army barracks there. She also had at least two evacuees, one of which kept in contact with my Grandparents long after the war ended. In fact that relationship continued to my Mum and to me, only ceasing when Joyce (evacuee) and her husband passed away. Joyce always referred to my Grandparents as Aunt and Uncle indicating their respect for my Grandparents. Joyce was provided as a middle name to my Mum as a way of showing love and affection. A special thing out of the brutality of war.

I am very proud of the contributions my Grandparents made to the war effort and the sacrifices they made, by answering the call of war and putting their new married life on hold, a story replicated many, many times over by others.

The Butcher surname was registered by me with the Guild of One-Name Studies in 2016.