There is no secret that I love surnames and the heritage & history that each one portrays. This image, here is reflective of my paternal line, which is predominately in Sicily, but there are lines that have migrated elsewhere, some that ping-ponged their way across the Atlantic or English Channel.

The surname of my Great Grandmother, VIRCIGILO, can be found predominately in Sicily as this distribution map, from Gens.info shows, but there are occurrences elsewhere, including Sardinia.

My own family is from a village in the dark pink area of Sicily on the map, but try as I might, I cannot find the birth record for my Great Grandmother, Calogera Maria Vircigilo.

Whilst as genealogists we deal with evidence and facts, sometimes you can only hypothesise and use reasoning to move forward and hope that you do indeed find some proof to either prove or disprove the hypothesis. In this case, given the family tendency to use traditional naming patterns I have begun the quest to locate the father of Calogera with the view that this might yield a positive response.

Calogera married Giuseppe Orlando, in Sutera, Sicily on 2nd May 1883, together they had ten children: 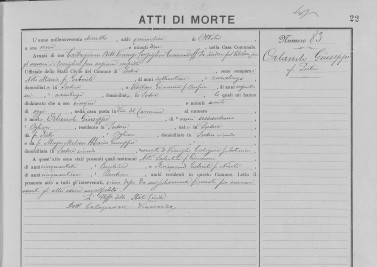 Church records are more comprehensive that those found in England and Wales. This document is the death record for my Great Grandfather, Giuseppe Orlando, Calogera’s husband.

The document, in fact this true for all vital records, declares both the parents and spouse. So this is a vital clue to her parentage. I still have to locate the record though. In this document, Giuseppe is the son of Pietro Orlando which is stated in the body of the document and in the right hand side column and Maria Giuseppina Magro Malosso. The document also says that his wife is Calogera Virciglio daughter of Antonino Vircigilo.

Despite this, I still do not have a document to prove the parentage of Calogera. I find that I am drawn to consider Sardinia as a potential location for links with the family, though as you can see the other location on the map highlights Piedmont as a more common area than Sardinia. Lazio is also a possibility given it’s proximity.

Vircigilo is not a very common name. A quick search of FreeBMD reveals very few in England and Wales and there are none prior to Second World War, which is reasonably significant. According to Forebears.io, the occurrences of the surname in 2014 appears like:

Italy 146, Croatia, 1, Switzerland 7, France 48 which includes French Guiana, Germany 2, England 72 and United States 72. The site does allow you to drill down further as per the various regions, Sicily is at the top, with 85. In England the most occurrences are in Surrey with 16. Again, something fairly telling in line with what I already know.

After the Second World War, the south of the mainland and Sicily were poor, though that was nothing especially new, but following the war, things were much harder and many looked elsewhere to find a way to survive. Much of Europe needing to be rebuilt, there was scope for low paid jobs in a variety of Countries, including England.

Surrey was a County that welcomed migrants. Not all were Italian, some were from Poland and Latvia, both Countries under now Russian control and therefore they were concerns of recriminations. The Italian community at Woking grew to become a 4,000 strong community. Mass is still given in Italian at the local Catholic church.

At this point, I am gathering every occurrence of the surname I come across. If there is any link to Sutera in Sicily then there is a high probability of a connection to my own family.