Six Degrees of Separation from How to Be Both to……

The #6Degrees meme occurs on the 1st of the month over at the blog, Books are my Favourite and Best which is written by Kate.

We start this thread with How to be both by Ali Smith. I read this a few years ago as part of a book group and could not make heads or tails of it. After four chapters I gave up – life is too short to read books that you don’t like. I always feel guilty with that stance though.

The book has won a number of awards and I too struggle with that.  In my experience books that tend to win awards are books that I cannot make sense of and I am often left wondering Why?

The story line of this book is that it switches between two worlds, 15th Century and 21st Century and I am using this as the link to my next book. 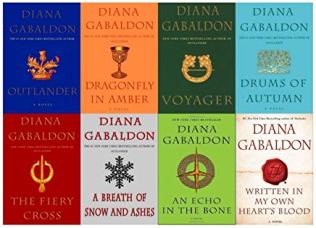 The Outlander series by Diana Gabaldon. The image here shows the first eight books in the series which I love. When I was first introduced to this series I was not sure. It seemed fanciful, but I thought I would give it a try. I absolutely loved them. I have read all but the last two books I think. When the books were made into a series, I sat down to watch the first series to see my husband equally engrossed.

The setting is between the period following the second world war and the mid 1700’s. Following the war years apart, Clare and her spouse have to get to know one another again. They holiday in Scotland, just after the war and one morning Clare goes for a walk. She touches standing stones and suddenly finds herself in the period before the Battle of Culloden. I won’t go one with the details, except to say that Clare finds herself married in both time periods, gives birth to a daughter, conceived in the 18th Century and born in the twentieth. Clare returns to the modern time, to her husband and raises her daughter in the United States where she trains to be a doctor, having spent her war years, as a nurse in the field. The series is a great one and whilst fanciful, it is tremendously researched and there is a twist in the tale….I recommend the series.

I will now introduce my next book. By coincidence, equally as fanciful perhaps, depending on your point of view. I have had this book for years, probably close to twenty. It has sat on my bookshelves and survived several culls and I do find it fascinating.

Yesterday’s Children by Jenny Cockell is set around the belief that Jenny had lived before, as a woman named Mary in Ireland. Mary died 21 years before Jenny was born leaving a number of children. In this book Jenny worries about those children and wants to find out what happened and does so through much of the research that we undertake as genealogists. Jenny also underwent hypnotism, she visited Ireland to the town that Mary came from and some amazing reunions took place. I found the book fascinating when I first purchased it back in the mid 1990’s, and since then I have read it at least on another two further occasions. If anyone else has read the book I would be especially interested to hear your thoughts – please leave a comment!

Using the tenuous link of the mind and the ability that our minds have. I took a diploma in Counselling course a number of years ago and this book was on our reading list; Love, Medicine and Miracles by Bernie Siegel. Our task was to read the book and consider the basic principle of mind over matter. Could patients genuinely heal themselves? I won’t share my answers with you, but I was fascinated by this book and subsequently read another by the same author (Peace, Love and Healing).

Moving on through the thread, I am following the medicine theme with this next book which I purchased to aid myself. Heal your pain now by Joe Tatta is an excellent read and I have seen a number of presentations he has done. Considering I trained in a profession whose focus is on medications, I take the personal view that pain is always going to be difficult to deal with and is there a way to do so without totally relying on prescribed medication, especially if there is no cure for the condition?

Tatta’s book focuses on the elements of pain caused by something we can control, foods we eat and the effect they have on us. Effectively doing a self examination of our lives and the fuel we give our bodies and does that fuel in some way contribute or cause the pain.

Now my link is that having lived we are each going to die. My next book is only recently published in paperback and is All that remains – A life in Death by Sue Black. Sue Black is an anatomist and forensic anthropologist at Dundee University, she is also a Professor and a Dame, so clearly at the top of her field and well respected for it.

At this point I have flicked through the book and it tells a varied story. The author has placed a personal spin on dying and speaks of her mother’s death and their relationship. Then she speaks of attending court and only looking at the people in the court setting asking the questions. It is a very varied book and I am glad I purchased it.

My last book in the chain is this one Family Diseases by Myra Vanderpool Gormley. The book was published in 2009 and is one of those books that dates quite easily. That said, it was interesting to read through the various diseases listed.

From my list this month, it does look as though I am thinking solid of death – I am not, but it is the one certainty in life beyond taxation! From a genealogical perspective we record the details of when someone dies, where and perhaps even how. We treat that as a primary source document, yet it might not tell you the full story. Look at the death certificate of one of your nearest & dearest. You likely know some, if not all of their health issues. Does the death certificate mirror that knowledge?

I am doing some work in this and will likely reveal it in the coming weeks for those that are interested.

I hope to play along in May and will try not to make the books so depressing!