Sources & Citations Series – What is a Source? 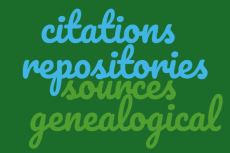 There are two types of sources:

A Primary Source is something written at the time, by someone who had first hand knowledge of an event. For example, the diaries of Samuel Pepys. In his diary, he writes about the Fire of London in 1666 and tells of the destruction of the city.

A Secondary Source is something written later, after an event, and may even draw upon notes from a Primary Source. Someone writing about the Fire of London and using Pepys diary would be a secondary source.

What is not a source? In a genealogical sense, Ancestry or one of the three big data set providers is NOT a source. For example, a Census is the source, but you might have accessed it via a library, archive or via Ancestry.

I began my research before the internet, so I have print outs of the various Census documents, taken from the films. Let’s say I have been working on my Butcher ancestors, from the rural Surrey village of Wonersh. I would record the source as the reference number for the particular page, and year of the Census. If I then subsequently used that Census image or wanted to double check something, I might then use Ancestry and in that instance I would say “accessed via Ancestry and the date” I do that because, whilst Ancestry has the Census for Surrey online currently, they might not in the future.

Not all Primary Sources are accurate, and that could be for a variety of reasons. For example, I was Christened at the Church where three generations of my family had been Christened or married. My parents were given a Certificate of Baptism which named my Godparents and my full name, except that my middle name is recorded incorrectly. I can hypothesis why it is incorrect, but I do not know for sure.

The middle name recorded on my Certificate of Baptism, is in fact my Mum’s. I suspect that I was crying and the vicar asked for the middle name and Mum gave her own. As Mum is not here, I cannot ask her and it was one of those questions, that I never got around to asking before she passed away.

In my genealogical database, I have recorded the Christening date, I have added the image as part of my One-Name study site and the event linked to me, although it is not showing as I am still living. My hypothesis appears in the notes and is clearly identified that it is a hypothesis

So, you cannot believe all that you read!

3 Responses to Sources & Citations Series – What is a Source?