Just last week I was alerted to this BBC series by a fellow Guild of One-Name Studies member. Since then I have binge watched pretty much the entire series. It is fascinating and the BBC get a well done here!

Here is how it works – two legal Barristers review an old case where the person, or persons were determined as guilty and subsequently hanged. We have to accept that not all persons who received this punishment were guilty and that is for a variety of reasons.

A living family member of the deceased “guilty” party are involved in the programme. They are looking at the family element of the case. Meanwhile the Barristers revisit the case files, and review the evidence. They talk to professionals in the various fields, looking at blood splatter and other forensic elements. One of the Barristers addresses the case from the angle of the prosecution and the other of the defence. They they present their findings to a judge and the judge decides whether the verdict already passed down and carried out was safe one. Where it is determined that the verdict was unsafe it begins a legal process which looks to pardon posthumously.

This is an excellent series and my one criticism of the BBC is that this was broadcast in the morning, so around 9 am London time – I was able to record it and view later, and it is available on BBC iPlayer to those in the UK and with the ability to login to a free iPlayer account. This should have been on in prime time, say 7 -9 pm. I do hope those of you outside the UK are able to see this series, it is fascinating. There is a write up on WDYTYA? website under the news section.

Just as I was watching one of the later episode’s, number 8 possibly, which was set in the Manchester region of the UK and centred around a crime committed in the 1930’s they set the scene on why there was such a “crime wave” and desperation – the financial market and depression, leading to people doing what they could to survive. They used the image on the screen reinforcing that there was significant unemployment and desperation, although it was actually part of a film and I was able to live pause the screen and capture the image below. 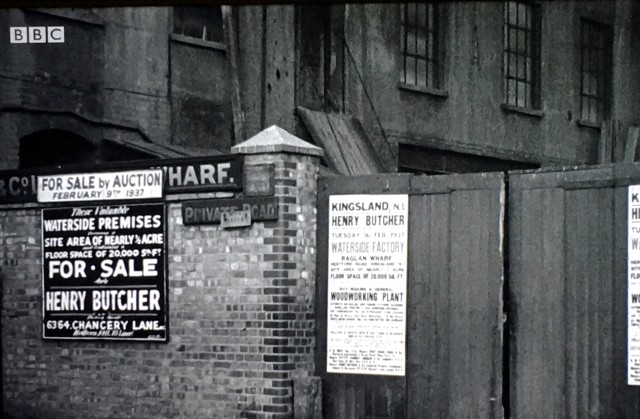 Why is the image important? Well it has the name Henry Butcher and the Butcher One-Name study is registered with the Guild.

Have you been watching the series? leave a comment below.