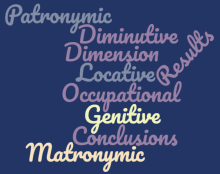 One of the elements of drawing conclusions is understanding the meaning of the surname.

Surname are typically formed from the following, withe those in bold the most common:

Surname with multiple origins may well have multiple meanings. Other considerations are that language, French and Latin has influenced English surnames.

Italian surnames are different again and can be broken down into these core groups:

Pet names, Botanical names, those reflecting kinship, geographical, names relating to animals, insects, fish, birds, occupational, objects, those reflecting desirable or undesirable traits and Compound names, which are surname made up of more than one word. I will come back to Italian surnames in another post at a later date, after this initial series has finished.

In this section too you can look at events that might affect families, such as illegitimacy and foundlings. One thing you might also seek to understand is how much more work you have to do in a particular country or record set. By using a spreadsheet to track marriages for example for England and Wales you will be able to see how many marriages you still need to access.

If your surname is one that is generally speaking common in one or more regions, then you may choose to analyse the stray examples.

Meanwhile, I’ll be back tomorrow talking about communications linked to our studies.

1 Response to Drawing Conclusions from Data