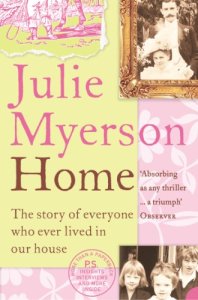 Julie Myerson did not set out to research her Victorian home in South East London. She was actually researching for a nineteenth Century novel and stumbled across the 1881 Census return for her home.

She discovered that her home at the time of the census was occupied by an author, his wife and their three children who were the same ages as her own.

I heard this on BBC Radio 4 and knew it was one of those books that I had to have. When it arrived I devoured it in about three days. The author set out to write a fictional novel to be side tracked by discovering the people who lived in her home 100 years previously. Her journey begins though with what led her to purchase this house from the previous owner sometime in the early 1980’s.

One of the poignant statements in the book comes from Julie Myerson’s daughter “….it’s not really our house at all, is it, Mummy?” Asked Chloe soon after I’d started on my project. “It’s like we’re just the top layer. And one day there’ll be another layer right on top of us, squashing us down”…….

When I think about it, I think Chloe’s statement is right, we are, in addition to being owners & residents, caretakers in a historical vessel.