Yesterday was my blogging birthday and I forgot! Therefore this post is a quick glance back over the last year. It is also an opportunity to say thank you to you all for reading, commenting and sharing the posts that I write here.

The last year has been a bit of a roller coaster. Some of the posts that I think will receive comments do not whilst others that are perhaps nothing more than my inane drivel receive comments abound. Those comments full of support, encouragement and friendship. In a world that is full of some miserable and dreadful things that is quite refreshing. 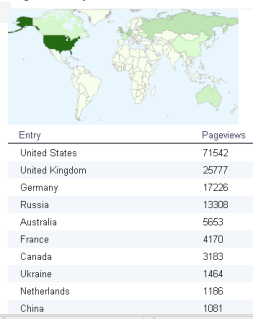 Looking back over the last year, the top ten viewing countries are shown here, with a surprise or two. I clearly get more viewers from the United States than the United Kingdom which is interesting.

The top post for the year was, unsurprisingly the first prompt of the Book of Me with over 1,000 views on 31st August 2013.

I ran a small series on Filofax in the early part of 2013. Part one received 448 views. Part three received 341 views and Part four received 351 views. Part two was written but the views did not make the top ten.

I also did two Tuesday’s Tip posts on Evernote. Part two of that received 413 views. Part one didn’t make the top ten, but only just.

When the Anglers Rest blog first launched in 2002 I wasn’t overly sure what a blog was supposed to look and feel like. Gradually over time it became second nature. There is a process to successful blogging and that is taking part, writing, sharing, commenting and the most important, which is I believe being yourself.

So a big thank you goes out to the people who contribute by the way of reading, commenting and sharing.