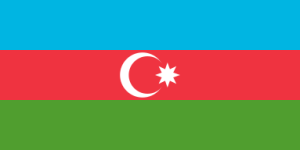 The Azerbaijan language is included in the Turkic group of languages, which also includes, amongst others Turkish, Tatar, Kazakh, Bashkir and Uigur.

In addition, the Arabic, Persian and Islamic cultures had influence on the Azerbaijani people.

There are three components to names in Azerbaijan –  Surname, Name and Patronymic.

Middle names were formed in a different way, different to that of Russian and other Slavic languages. The Patronymic name of a person, that of his father does not change. Prefixes such as ovich, evich, owna, evna did not exist in Azerbaijani history, instead relate to the Soviet period. In modern times, these are used in official communications only.

The Patronymics have two forms – Ogly and Kyzy – the former means son and the latter means daughter. When the Red Army arrived in Azerbaijan in 1920, individuals were asked for their name as part of the registration process, as the name that we would associate with the surname, was essentially the name of the father, the Russians added the usual suffix to be found in Russian culture. About 80% of Azerbaijani’s have retained this, but gradually the Russian suffix is being removed.

Excluding the various endings, the pool of Russian surnames is relatively small, there are generally speaking 15 popular names and these account for 80% of the population.

With the name Mamedov being the most popular.

The following are a list of popular Azerbaijani Surnames

With the name being a popular adaptive form of the Arabic name Aliakbar divided into two parts – Ali (great) and Akbar (oldest).

In ancient times, locals in their entire life had at least three names, all of them different from each other

There are also prefixes added in a respectful manner, a degree of kinship, some of which might not be given through a connection to blood or marriage, but instead as a sign of respect.

This post is part of the A-Z Challenge. It is also part of my Surname Series 2022 and for those want to focus on Non-British Surnames click HERE. You can also find more surname posts HERE.