A Year in Surnames Week 1 – Surnames of my Grandparents #AYearInSurnames

Posted on September 6, 2020 by Julie Goucher

All four surnames, and how they link into my family saw variations of migration, whether that was across County lines in the United Kingdom or across the English Channel or Atlantic in regard to my Italian Grandparents. 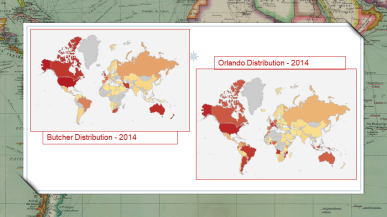 The image shown here, comes from one of my surname presentations and has been created using the site, https://forebears.io

This shows the distribution of the surnames, Butcher and Orlando for 2014, which is the only year where there is a comparison between the two surnames.

My own Butcher family migrated across the globe much earlier than this though, starting with John Hunt Butcher in 1815 who left Surrey for Tasmania along with his family. Other branches of the family later on went to Canada and on the home front, moved consistently and frequently between Surrey and Sussex.

My own Orlando family migrated in two waves, firstly to the United States in the early years of the 20th Century and later post the second world war, though at that time they came to England. Since then they have ping-ponged their way back and forth.

In thirty years of research I have never explored if my Matthews family individuals migrated out of England. My great great Grandfather, John Matthews (born 1848) migrated from Warwickshire where he was a re-married former widower with three children from his first marriage and a coke dealer, to Surrey. It was relatively common, for widowers to remarry fairly quickly, though in John’s case he took four years to do so. He died in Surrey in 1927.

My Grandmother, Maria Carmela Licata born 1899 and lived her entire life in Sutera a rural village in Sicily, the youngest of four children. Her brother and two older sisters left Sutera and migrated to the United States, settling at least initially in New York. Of the sisters, the oldest was married and sailed with her younger sister and two children, to join her husband who had already sailed and established his life in America. The younger sister was not married and recorded her brother as her family member. It has been two years since I did any work on this family, but the older sister died in New York, with her death registered in New York and also entered into the death register in Sutera, which un-nerved me a bit, as it inferred she had died in Sutera, whereas it was written by a priest keeping careful watch on his former flock.

The next instalment of #AYearInSurnames will be posted sometime next weekend. If you would like to take part, you can read the introductory post HERE, but essentially,each Saturday (UK time), a blog post that fits with the theme for the week should be written and posted to your own site during the forthcoming week. Do not forget to leave the link for your post in the comments on this site.

For those who like to plan ahead, I have released the blog themes for the entire year and these can be downloaded from HERE