Over the course of the last year I have spent a lot of time writing articles about beginning a One-Name Study and used my own as a living and working example. These articles eventually formed a series, generally aimed at those new to Surname research or One-Name Studies, but not specifically so. I believe that you can always learn something! 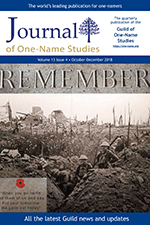 These articles did not initially start as a series, it simply emerged that way, beginning from a question posed by a student on the Pharos introduction course which I answered and then turned into an article. I then focused on the aims and processes of my studies, a more general structure and then finally into an article on the comparison of two significant studies (sadly the footnotes and references were not copied across from my text to the actual printed journal!)

Having written the articles, they generated a number of emails with other Guild members and of course, it is often the small comments that yield a glimpse of an idea for future articles and written material. Of course, as I read the journal, I often find that I think or read of other data sets or material that I should explore for my own studies.

Isn’t that the point with reading and sharing information? That we inspire others or perhaps even ourselves, spurring ourselves on to more research opportunities or ideas.

In the meantime, I have started work on the idea for my next article, although what often starts as an idea does in fact change by the time the article is submitted to the editor! I hope by the end of the year to pull together these articles and a few others and publish, but more on that in the coming months.

1 Response to Writing about One-Name Studies