Back in the summer I wrote this post about planners and notebooks. In response to a comment I mentioned that I often created specific pages for individuals where there were “document heavy” individuals.  I promised I would write more about it and realised that I have not done so, until now.

The two pages below relate to my fifth x Great Grandfather, Daniel Butcher (1720-1787). Daniel is an interesting chap. He was born in the rural parish of Bramley, Surrey in 1720. His family are well documented, in Bramley and neighbouring villages. Daniel himself, appears in a variety of parish documents, such as witnessing marriages, leasing land, paying Tithe as well as buying and selling various properties with his brother Richard. 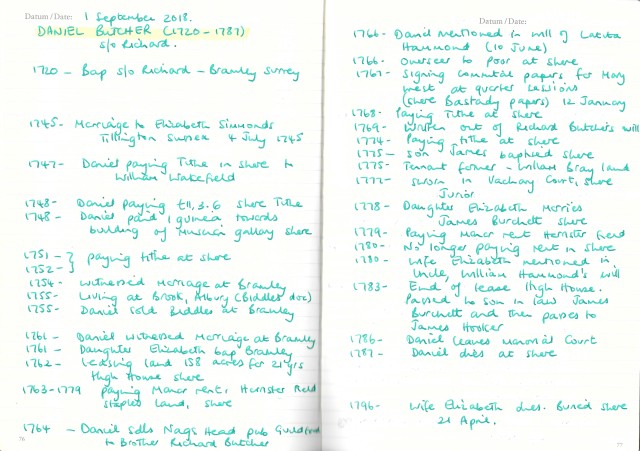 We know from a variety of documents, that something happened between him and his brother Richard, because he was written out of the brother’s will and he was referenced rather scathingly in a will relating to his wife’s family. He was later removed from the Manorial Court and died the following year.

There were though two things that bothered me:

In 1761, Daniel would have been 41 years old and by the time of his son’s birth he would have been 55. The gap between the children has always bothered me and the age of Daniel additionally so. I have searched across Surrey, Sussex and Hampshire for any marriages between a Daniel Butcher and Elizabeth Simmonds (or Simonds) and there are not any. I cast the net further and that also yielded nothing. Furthermore, I know they were certainly married to each other because I have a number of documents that support that, including them being mentioned in documents of other family members.

Could a couple be married for 16 years and not have any children? Well yes, it is possible. Infertility is not a modern issue, so there is possibility. Furthermore, there is the possibility of miscarriages. Then another 14 years between the birth of daughter Elizabeth and son James. It is quite possible that as a female heads towards the menopausal years that she conceives. At this period of time, there are no specific documents relating to these type of health issues, but they clearly could have existed.

It is quite a quandary and frustrating given the documents that I have, which are very specific. The timeline, drawn as you can see gives me a structure of dates and events. It also shows me where I have gaps in my data. For every fact mentioned on the timeline I have a document to support it.

The one thing that I am now seeking to verify is the age of Elizabeth upon her marriage. In 1745 the legal age of marriage was 12 for girls and 14 for boys and this might have bearing on the lateness of the baptisms for children. Also, we have the baptism records, that does not necessarily reflect when a child is born. It is typical for a baptism to take place whilst the child is still an infant but not necessarily so. Whatever the reason, money was not a factor as the family were well off.

I would be interested to hear any  theory’s or thoughts.