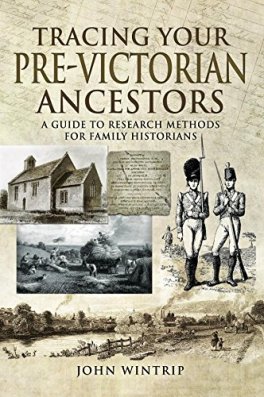 This is a fabulous book for those who are embarking on researching their genealogical pursuits in England and Wales, whether you are new to this area of research or an established researcher. This book takes you back earlier than Civil Registration in England and Wales which began in September 1837 and for which the indexes can be found at the large genealogical data companies and FreeBMD.

This book looks at research using Parish Registers, Bishop Transcripts, records kept in Latin and delves deeper, so that using other records you can take your genealogical tree’s back further. There is a small chapter on Names and on naming patterns for this period.

Patterns for daughters followed similar patterns and often children were also named after Godparents or other close friends or family.

This is typical and not absolute in my experience and I have several examples in my own British family where the usual naming pattern was not followed. My Italian family on the other hand was almost absolute in the naming patterns.

It was common practice to name a child of the same sex after a child that had passed away earlier. I have an example in my Italian family where the mother gave birth whilst an older child was ill and not expected to survive. The baby was a son, like the older child and was therefore name after that child and the paternal relative who the initial child was named after. The older child pulled through the illness and the family had two children, a few years apart with the same first name. In that instance it is likely that a nickname was used within the family to distinguish one from the other! So whilst naming patterns are really helpful depending on the Country and Religious culture there may be differences and the odd curve ball that leaves you scratching your head!

What I particularly like about this book is that it encourages thinking beyond the obvious. It focuses on knowledge and skills, evidence, sources, family reconstruction, social status, relocation, religion & occupations, searching for information, archives and libraries, missing ancestors, mistaken identity – we all have them, two people, roughly the same age, born in the same area, living in the same area and called the same name – if we are especially lucky they will even have the same occupations and marry women with the same name!

Having read the book I went back to the generation of my maternal Great Great Grandmother, Caroline Ellis. She was born in a rural parish in Surrey in 1844 and was a formidable character according to my Great Aunts each who knew her. Caroline, like her daughter, my Great Grandmother and my Great Aunts all lived until they were well into their 90’s and I have a super picture of Caroline and four of her daughters – I digress.

I focused on Caroline’s family because I had some loose ends, including one relating to Caroline’s brother Edward, known to my Great Aunt as Uncle Ted who lived with Caroline. I had never explored his life in detail, beyond what I had been told and identified on official records – essentially I knew he lived with Caroline, was called Uncle Ted by my Great Aunt and when he was born and died. What about what happened in the rest of his life? A quick search for him on the various genealogical data sets and I located him, in a military regiment in Kent, his record at Chelsea pensioners and his marriage to a women who was 15 years older than him. I did a quick search of the Regiment and was able to establish where he served and his Chelsea Pensioners record filled in some of the blanks, his ill-health was caused by 18 months in what was referred to as “British Burma”. I trawled back through note book after notebook and my Great Aunts all of whom had amazing memories never mentioned a word about military service. The reason when I added it to my timeline was because he joined up and served all before they were born, so they probably only saw an ill old man and never looked or asked beyond the obvious which was typical in those days, and neither did I; and I should have done, because Uncle Ted deserves to be remembered and his life is so much more than just a name and a few dates.

So I plan to spend some time filling in the blanks on Uncle Ted and seeing what else I might not have thought about relating to him and his brothers.

This is an excellent book and I thoroughly recommend it. It is available on Kindle, but I have the physical book and my copy has a number of post it notes in it.