Today’s post looks to a very topical one for the UK this week, migration into the UK and does also reflect the link to the Partition Museum which you can read HERE. 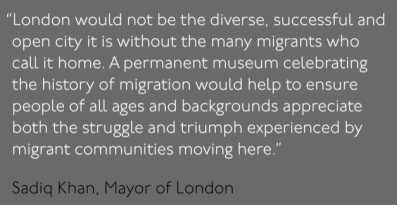 London is a very culturally diverse city and the Migration Museum captures some of the groups that reinforces that diversity. Visit the website and let the top banner scroll between the slides, the full slide this quote comes from is one of those slides

I am the daughter of migrant and what I find fascinating is that no matter who the latest group of migrants are there are significant similarities between all of those groups. What does change is the country the folk came from, the religion and culture and perhaps the underlying reasons for migrating.

This post, from the website says that we tend to believe that when HMT Windrush arrived in London in 1948, migration began in earnest, but the truth with migration to England, Great Britain and of the course the United Kingdom began much earlier that that. The Windrush issue is something that is very important, concerning and something must be done – this is not a political post and I don’t wish it to be. From a genealogist point of view just how many important documents have been destroyed and that is an open question for any nation.

Of course, migration hasn’t just happened in London, it has happened over time in many, many places in UK and many major cities have Little Italy’s & Chinatown’s as folk move into areas where others have already settled.

This museum attempts to bring those strands together wants to record and honour those folk who came here from other lands, regardless of when. Any country forms on the back of the people who came before us, whether they were migrants or not.

Whilst as someone with a One-Name Study and One-Place Study there does not appear to be anything index or collection that might assist, I came away from an hour exploring the site with six things written on an index card, of ideas and suggestions of where to look for material on the bases of what material was on this site.

The Pharos course, Introduction to One-Name Studies does not specifically look at “foreign surnames”, and by foreign I mean names where their origin is outside of Britain, so Italian or German for example, but there is a small section about  them in the course. I am researching an Italian surname in particular. The Guild of One-Name Studies requirement is that the aim of a study is to be global, with no time limits. Therefore it is relevant to understand the foundations of surname research and to look at the scope for researching surnames whose origins outside of the UK inside the UK, especially since the UK is a country with a long history of migration, which is a talk that I am giving to Legacy Family Tree webinars later this year.