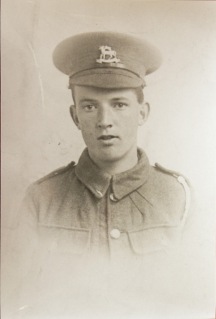 In Remembrance of William James West

William James West was born in Aldershot Hampshire in 1898, the son of William Arthur West, a military man and, Emma Jane Ellis (Harris).
I had always known that my Grandfather’s first cousin had died in the First World War, and then I was presented with a photograph of William, such a handsome young man! The moment I saw that photograph I wanted to know all I could about William.
Private William James West served with the 1st Battalion Cheshire Regiment. He is Commemorated at: Ligny-Sur-Canche British Cemetery, Pas de Calais, France. He died of wounds on 5th September 1918, aged just 20 years.
He is commemorated on the War Memorial at Stony Stratford Buckinghamshire, where his parents, William Arthur and Emma Jane West lived & ran their newsagents business at 63 High Street.
I submitted the details for William James to the First World War Digital Archive whilst material could be submitted. As I wanted to further preserve the details of William.
William James had two army numbers and was Private T4/212898 William James West, Army Service Corps, and later was 51275, 1st Bn. Cheshire Regiment. His T4 Army Service Corps prefix indicates he once served in transport.
As I said I submitted his details to the Digital Archive and they further spotted a detail I had not known about the photograph, as he is rather oddly, pictured above wearing a ‘lamb and flag’ cap badge, relevant to neither unit he was known to have served in, (unless he served for a time in the small Army Service Corps Armoured Car Companies, recruited from transport personnel. Their ‘Light Armoured Motor Batteries’, operative in Palestine, wore a similar badge unofficially). 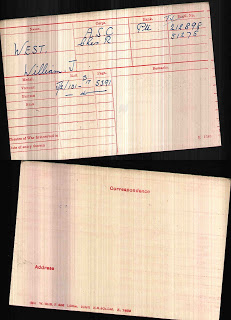 Bombing during the Second World War destroyed some of the records from the First World War.
I was lucky, in that William James’s record survived and is a total of 24 pages detailing when he enlisted, his service and which regiment he was attached to and then, finally his gun shot wound to the chest leading to his death in 1918, just months before the war ended.
I have downloaded a copy of his Service Record and have just noticed a mention of the Devonshire Regiment that I had been unaware of.
His medal card, confirms what medals his family were entitled to claim after his death and this corresponds with the Service Record.

May he rest in peace and know that even though he paid the ultimate sacrifice he is still firmly in the heart of his family.